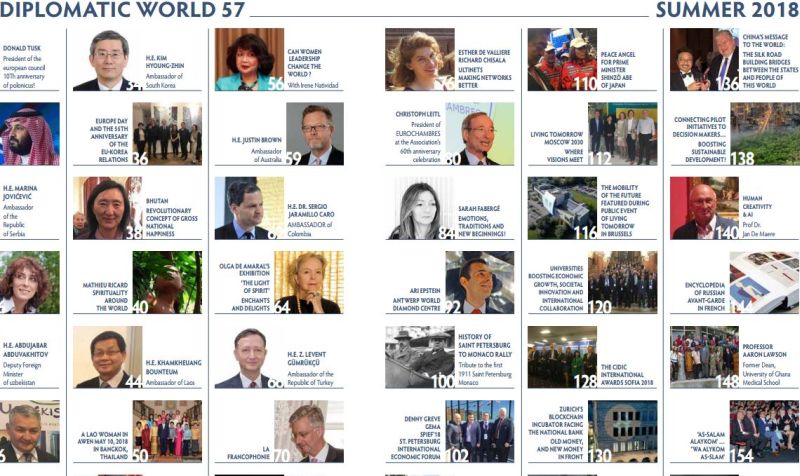 CHINA’S MESSAGE TO THE WORLD: THE SILK ROAD – BUILDING BRIDGES BETWEEN THE STATES AND PEOPLE OF THIS WORLD

Roads and railway tracks across thousands of kilometres between Asia and Europe, ports and airports, power plants, pipelines and logistics centres in Pakistan and Poland – China is investing 900 billion dollars in the “New Silk Road”.

The network of trading routes on land, water and in the air is to link up the Asian, African and European states situated between China and the Old World. It is also being called “One Belt, One Road”. The mammoth project that has been pushed by head of state Xi Jinping since 2013 is probably the largest development programme ever in the world. The Chinese “World Public Diplomacy Organization (WPDO)” has now been founded with its head office in Geneva as part of implementing the Silk Road objectives. WPDO has set itself the target of stabilising the political and economic links between the East and West. DiplomaticWorld spoke to the lawyer Helmut Naujoks, President of WPDO in Germany.

“We want to build bridges to strengthen the harmony between nations,” says Naujoks, summarising the WPDO’s visions as follows: “We want to help shape the economic future between the East and West. We are building bridges out of music, art and language and bringing the world’s states and people together.” The WORLD PUBLIC DIPLOMACY ORGANIZATION uses art as the means of communication for this dialogue between cultures. “Art is a suitable medium to sustainably support harmony between nations,” accentuates Naujoks to Diplomatic-World.

Sylvia Gallus, member of the WPDO Board in Germany, explains that The Silk Road is going to create thousands of jobs worldwide. “A close network of trading routes is evolving that links Central Asia with the Old World and the roughly 60 countries situated between them,” emphasises Sylvia Gallus. WPDO wants to contribute to this: several infrastructure projects are being developed along the routes, such as new railway and road links, airports and ports, logistics centres, commercial and industrial parks, pipelines and power plants.

SMEs with huge expertise and international experience are predestined for the planned infrastructure projects in the Eurasian region. Machinery and plant manufacturers as well as suppliers of special equipment in the energy, railway technology and port development sectors in particular can rely on packed order books, says Sylvia Gallus. The SME segment in particular can find respect in its worldwide unique innovation pool that also reliably completes complex projects under difficult conditions, states Sylvia Gallus. Wanting to understand the Chinese culture is mainly crucial for success. “Patience is important,” knows Helmut Naujoks. “I recommend entrepreneurs to seek dialogue time and time again. It is part of the Chinese way of working to proceed cautiously. European impatience is not helpful, quite the opposite. Cultural and interpersonal aspects determine success or failure, says Naujoks, who is in China ten to twelve times a year. The Chinese are polite, issue invitations to potential business partners, give them gifts. “But that doesn’t say anything about a possible deal,” explains the China expert. “It may even be the case that you never hear from the potential Chinese partner again.” Nevertheless, European entrepreneurs should overcome their shyness towards the Chinese and exercise patience: “Nothing happens quickly in China. It takes a lot of talks before something binding ends up on the table.”

Supposedly mere formalities are also given top priority in the land of smiles. The company stamp is given a prominent role as a result. “Even a document with a signature does not have any legal significance without a stamp,” clarifies Naujoks. “No authority provides any information when presented with such a document.” The business card is similarly important It is considered to be the “key to Asian business”. A bilingual card in English and Chinese is recommended. It is a deadly sin in the Far East to take a partner’s business card without reading it carefully and then put it in your back pocket. “As then,” according to Naujoks, “the Chinese feel that you are sitting on their face when you sit down.”

WPDO has set itself the specific goal of confronting any fears about China. “The new Silk Road shows how visionary China is in its thinking and action.” The development of infrastructure links between Asia and Europe is “a major opportunity for China and Europe’s citizens and national economies.” Of course there is a different culture in the People’s Republic of China than in Europe: “But I see this culture as being open and trusting,” says Naujoks who regularly meets up with investors in China throughout the year who are looking for collaborations in Europe. He advises European entrepreneurs taking a leap into China to be willing to adapt and develop good contacts: “Otherwise you will fail there.” “Friendship comes before business. Or in business German: sustainability creates prosperity.” According to Naujoks.

One thing is certain for WPDO: a close economic and cultural belt between Asia, Africa and Europe serves to “stabilise world peace.” WPDO is committed to this all over the world month after month; this is our contribution to maintaining peace in the world, explains Naujoks.

© 2022 by Anwaltskanzlei Naujoks. All rights reserved.